Life is as dear to a mute creature as it is to man. Just as one wants happiness and fears pain, just as one wants to live and not die, so do other creatures. – His Holiness The Dalai Lama

We recently moved into a new home. As with most moves, there are circumstances that you cannot control, and we have had our share this move.  Our landlord has been building on an addition to the house since before we moved in, and the construction still continues.  During all of the banging and vibrations, we discovered an active bird’s nest in the exterior wall.  We had been monitoring the nest for weeks, but this weekend we heard the wee cries of new hatchlings!

As exciting as this was, we knew that we had to make a decision quickly because the construction crew was scheduled to come the next day to seal up the exterior wall with insulation and drywall. The nest was going to be sealed in there with live baby birds! We put our heads together, identified the bird species, did some bird fact checking, and came up with the best solution for this species … We relocated the nest.

NOTE: Nesting songbirds are protected by federal law, which prohibits moving their nests!

In the United States it’s illegal to remove or destroy any active nest from any native bird species.  An active nest is defined as “a nest with eggs or brooding adults in it”.  If the nest has been abandoned or no eggs have yet been laid, it can be removed or destroyed as needed.

House Sparrows (Passer domesticus) and  European starlings, are not native birds. This is how we knew that it was legal to relocate the nest.

The images below show how we did it. I am sharing this to help others if they encounter a similar situation with native or nonnative bird species. 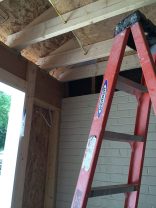 Where we knew the nest must be located, since the parents had been carrying nest materials in there for weeks.

This was the bird nest, fortified deep into the exterior wall of our house. 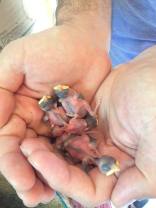 The wee birds were flopping and crying until I placed them into my husbands hand; they immediately calmed.

We gently placed the hatchlings into the soft planter.

Here I am placing their original nest (right hand) into the new nest (left hand). Then we nestled the babies into the original nest inside this planter.

If you click on/scroll over the images above, you can see how and what we were doing.  Please note that this entire process happened very quickly, to reduce the amount of stress on the parents and the offspring.  After we moved the baby birds to the new nest area, we c l e a r e d ourselves out of the area, to allow the parents to feel safe enough to explore the area and listen for their offspring.

As we had hoped, Mother Nature and the maternal and paternal instincts saved the day! Just hours later, the cries of the hatchlings were heard and the parents found their offspring!  The mother and father are now guarding their recently relocated nest.

The next day we bought a bird feeder and offer them seed they prefer. 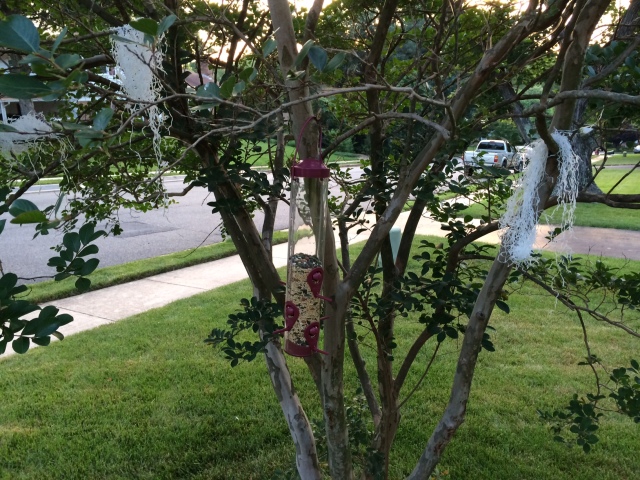 We found a very sturdy double seed bird feeder at Lowe’s for $5! I set it up in a tree that I often see the parents hanging out in. I also added some biodegradable nesting material; they have been using it already! yay!

If you have found this article while searching for help on ‘how to move a bird’s nest’, or ‘how to help a baby bird’ it’s very important that you correctly identify the species of bird (by watching the adult birds at the nest), before you even consider interfering with the nest!  You must determine whether or not the nest removal would be legal according to local wildlife laws.  Native birds are protected species, so tampering with a nest could lead to hefty fines or other penalties.

Somenestsshould not be removed regardless of the circumstances, unless wildlifeauthoritiesare consulted, or there are no other options to keep the nesting birds safe. These nests include:

What About Touching The Babies?!?

You’re probably familiar with the “rule” that many of us were taught as children: never touch baby birds, or the mother bird will reject her own offspring.  Unfortunately, it’s still generally believed that the mere scent of a human on a hatchling or fledgling bird will spook the mother bird into abandoning her offspring.  Good thing this misperception is FALSE!  This lore may have been invented for keeping children away from birds, in order to ensure the bird’s safety. Also, the parents of the baby bird may be nearby, and could become protective and aggressive when they see children near their nest; parents could have been protecting their human offspring with this tall tale. In fact, birds have a limited sense of smell and even if the mama bird could smell your scent, this would not interfere with taking care of her offspring.   However, if you disturb the eggs in a nest, the mother and father birds could understand that they are facing a danger, and may abandon the nest completely. So please give nesting birds the space they need!

Mother birds will not reject their babies because they smell human scent on them, nor will they refuse to set on eggs that have been handled by a person. Most birds have a limited sense of smell and cannot detect human scent. (If you handle bird eggs while the mother is away from the nest, mama bird will usually notice upon her return that the eggs were disturbed during her absence, and some species of bird will take this as an indication that a dangerous intruder is present and may temporarily or even permanently abandon their nests as a result. Such behavior is relatively rare, however, and in these situations the mother birds are reacting to visual warnings, not olfactory ones.)

Learn the Truth Behind More BIRD MYTHS AND MISCONCEPTIONS!

So what should you do if you find a baby bird out of the nest? These graphics should help you! 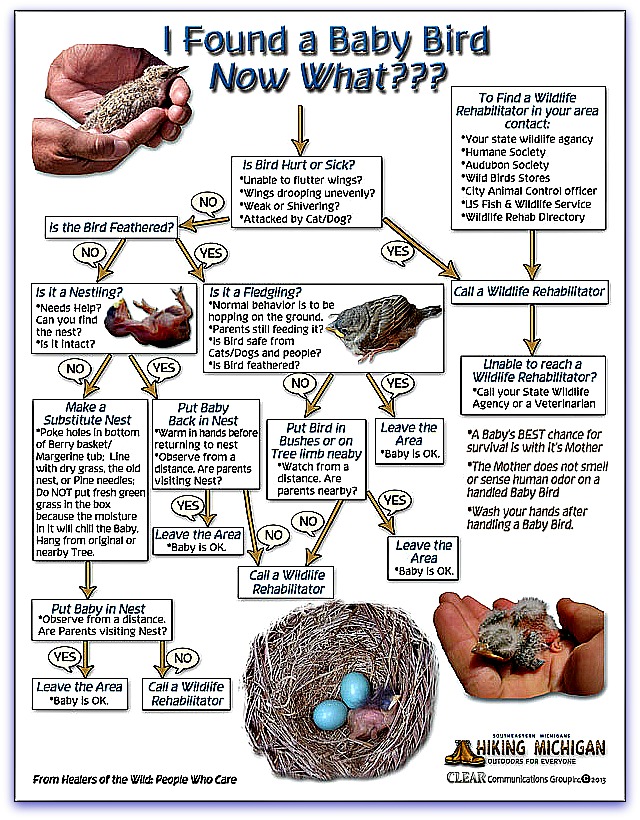