We’ve always known our dogs are good for us, but here’s a biological explanation for it beyond the fact that they make us feel good. – Patricia McConnell, Ph.D.

We don’t have kids; we have fur, finned, and scaly kids.  Our many critters are our “kids”.  We have four cats, a fish, a turtle, and a dog.  They are all amazing in their own way, but there is one of them who feels like Home.

We love our dog.  Yet, somehow saying “I love my dog” doesn’t come close to describing how I feel when I think about her.  Just looking at her makes my heart swell.  I feel good just being around her, and I know she feels good being around me when I am feeling great.

As it turns out, science has a hand in this love connection.

Have you heard of the “Love Hormone?” That’s how some people refer to oxytocin, which acts as a chemical messenger in the brain.  It’s produced in the hypothalamus and is responsible for feel-good human behaviors such as sexual arousal, recognition, trust, anxiety, and the mother-infant bond.  It also serves to counteract the stress response and reduce adrenalin, which results in less anxiety and less immune suppression.

Oxytocin, a neuropeptide synthetized by the hypothalamus in mammals, regulates many complex forms of social behavior and cognition in both human and nonhuman animals.

That’s why people refer to oxytocin as the ‘love hormone’, ‘cuddle chemical’, or ‘trust hormone’. They even discovered that people are more trusting of strangers if oxytocin is sprayed into their nose.  Science now has evidence that oxytocin is directly involved in the bond between people dogs. (Details here)

Does your dog have a favorite doggie pal?  Science and chemicals may play a role in their friendship as well!   A study published in Proceedings of the National Academy of Sciences discovered that a whiff of oxytocin made the dogs friendlier toward their dog pals.  The researchers also determined that oxytocin is key to forming and maintaining close social relationships—even when those are with unrelated individuals or different species.  This could explain why many dogs form close bonds with others species of animals. (Details here)

That animals of different species induce oxytocin release in each other suggests that they, like us, may be capable of love. It is quite possible that Fido and Boots may feel the same way about you as you do about them. You can even call it love. -Neuroeconomist Paul Zak

Researchers found the hormone oxytocin spikes in both human and canine brains when a dog gazes calmly into his/her person’s eyes! 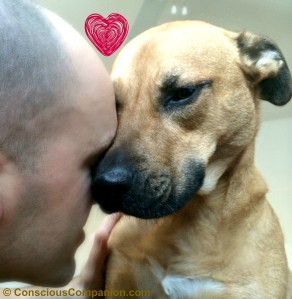 A study published in the journal Animal Cognition discovered that oxytocin:

The researchers theorized that since both humans and dogs usually produce more oxytocin when they interact, the presence of the oxytocin hormone indicated that dogs evolved into being “the perfect human companion” because that chemical bond allowed them to better read their person’s commands.  (No cats were available to comment on these findings.)

“Our relationship with dogs are very much like parent child relationships. We respond to our dogs quite a bit like human children. Brain imaging studies have shown that brain networks of mothers respond in the same way to pictures of their own dog to their own children.”

“Dogs may have found a way to ‘hijack’ these parenting responses and dogs over time may have taken on more childlike and juvenile characteristics to further embed themselves into our lives.”

Humans may feel affection for their companion dogs similar to that felt toward human family members.

Feeling Blue? Play with Your Dog!

When you are feeling down, be glad your dog is around.  Science proved that dog guardians experience a burst in oxytocin after playing with their canine companions.

These studies also found that: 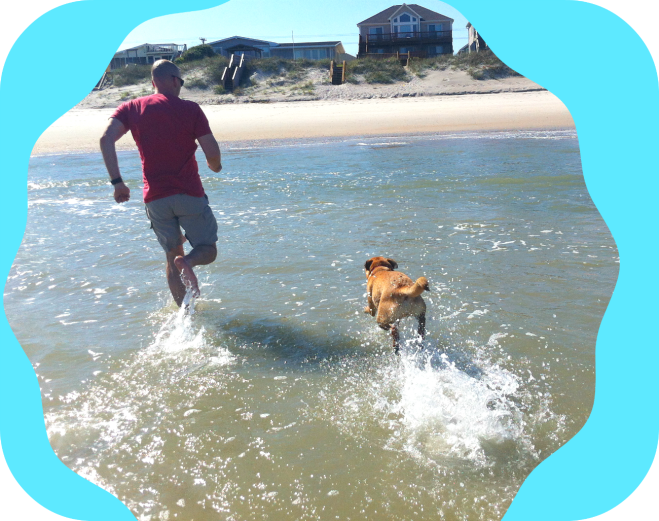 “The world would be a nicer place if everyone had the ability to love as unconditionally as a dog.”
―M.K. Clinton (author, The Returns)

Feeling Down? Get UP and Get Outside!

Life is too short to stay inside. Get outside! Appreciate what nature has to offer! Find your JOY! Breathe in the fresh air! Soak up the sun! Have an adventure with your best friend! You will both be happier and healthier if you do! Our dogs are the doorway to heaven on Earth!

Feeling Down? Get UP and Get Outside! on Vimeo

This was originally posted on 4Knines’ website in 2015.  You can read my full article on their website.

Want to read more about the science of Oxytocin? Check out Did Dogs Hack the Oxytocin Love Circuit? -Comparing Dogs to Wolves Doesn’t Necessarily Inform About Domestication.