People fear what they don’t understand and hate what they can’t conquer. ― Andrew Smith

My heart is so happy right now.   My social media news feed has been overtaken with posts about snakes!  These post are not snake-hating posts; they’re posts from snake savvy people who absolutely adore these magnificent, valuable, and misunderstood species.  They’re posting about snakes today because it’s World Snake Day!

Snakes (like most reptiles) are one of the most misunderstood and least researched animals in the world.  Before you decided to disengage from this article, please give me just a few minutes of your time.   It’ll be worth it.  And one thing is for sure:  You’ll learn something new!  And, if you are lucky enough, you might see snakes in a new light by the time you are done reading this.

If you have been following this blog, you know that I usually discuss companion animal topics, but I have a secret: Reptiles are my passion.  When I see a snake, toad, frog, turtle, or lizard my entire being lights up with glee.  While others are screaming and running away, I am trying to figure out how I can get closer to the animal without freaking him/her out!  I know that might seem crazy to many, but if you have been in my shoes you would feel this way, too.

I have worked with snakes for nearly 20 years.  I was indifferent to them prior to this, but things change after 20 years of educating and research.  After working with exotic and domestic snakes, venomous and nonvenomous, boas and pythons, constrictors and prey chasers, common and critically endangered, captive and wild, I saw every species of snake in a new light.  Each snake taught me something new and captured my imagination.

During my career with snakes one of the most amazing things I was able to coordinate and witness still warms my heart. Youth and adults (many who were once afraid of snakes) learned to love and respect them.  Then, if that wasn’t amazing enough, I watched these youth and adults share their love and appreciation of snakes with strangers.

These mini miracles happened at The Audubon Nature Institute in New Orleans, Louisiana.

In a very special area of the Audubon Zoo, called Discovery Walk, we focused on educating the public with facts not fear. And since most people are scared of anything that slithers, snakes were the perfect teachers. Some snakes were common snakes you could find in your backyard, and some were critically endangered.   Our collection of public education snakes were animal ambassadors. They were the voice (and face) for snakes all over the world.

Yes, you read that right; snakes can have good times!  In fact, snakes are very sensitive to our emotions, our moods, how we are feeling one day to the next, and our scents.  Some of our snakes even had a favorite handler!

Snakes are not the mindless creatures that many believe them to be.  In a word, they are spectacular.

Below is a slideshow of images that capture fun-filled education and appreciation of the species of snakes in our ambassador program.
(Note: You can see the images & captions better from your computer, not on your mobile device).

“Nothing in life is to be feared, it is only to be understood. Now is the time to understand more, so that we may fear less.”― Marie Curie

There are so many ridiculous myths out there about snakes.  And honestly, fear is at the heart of these misconceptions. The initial reaction when someone finds a snake is to kill it.  People do this because they are afraid.  So I am going to share a few snake facts with you today, in honor of World Snake Day, to help people to not be so afraid.

Let’s Remove Fear and replace it with Facts!

Snakes are not the malevolent creatures portrayed in the Bible. Over time, they have become convenient victims of superstition, bad movies and the anthropomorphic misassumption that animals can be evil. It is entirely possible that if Satan had appeared to Adam and Eve as a squirrel, humans today would try to justify an irrational fear of squirrels. 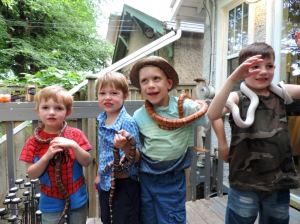 Snakes deserve much credit for the invaluable role they play within ecosystems, including the ones in our backyards!  Focusing on facts –not fear, can help raise awareness and support to better understand these misunderstood species.  Jul 15, World Snake Day, is a opportunity to see these animals in a new light, and to gain respect for them.   Let’s remove our fears and illusions about snakes.  Let’s help our fellow travelers of this Earth gain recognition as a spectacular species.

And thank you, to all of my volunteers, interns, and colleagues. You all were the greatest, most powerful voices for the voiceless.  You affected thousands of people’s lives. You were the compassionate educators. You literally saved species.  This is dedicated to you as well. All my love.

Tomorrow is St. Patrick’s Day AND it’s also the feast day of the original Cat Lady, Saint Gertrude, so many are celebrating all over the world.

Although our family has a deep Irish heritage and we absolutely adore Ireland, I Am not one to celebrate nonsensical traditions.  One side of my family’s heritage is Irish and Welsh, so Saint Patrick’s Day is always quite amusing to me.  People all over the world are celebrating a culture they know very little about.  Here’s just a few facts that most green food/beer consumers know about:

Lá Fhéile Pádraig (Saint Patrick’s Day) is a religious holiday in Ireland, that happens each year on March 17th.  They celebrate the patron saint of Ireland – Patrick, who lived in the beginning of the 5th century AD.  Saint Patrick is the most recognized Irish saint, however, the real St. Patrick wasn’t even Irish!

You can learn more about the history of St. Patrick Day here and here.


The image below pretty much sums up the silliness of many myths and legends that have been created around this day of celebration around the world.  And the image above sums up the real Ireland. So in honor of the Irish, I wanted to share some insight into where one particular myth about this one came from.

MYTH: Saint Patrick banished all of the snakes from Ireland.

Legend states that Saint Patrick, the Christian missionary, rid the slithering scaly reptiles from Ireland’s icy shores by chasing the snakes into the sea after they began attacking him during a 40-day fast that he had on the top of a hill.  This was just around the time that he had semi-successfully converted the Irish people from paganism to Christianity during the fifth century A.D. 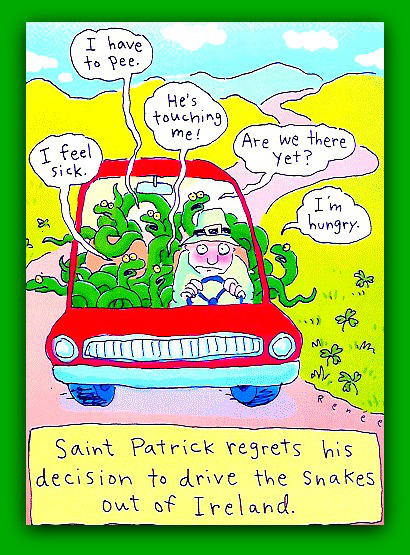 TRUTH:   No, he really didn’t drive the snakes out of Ireland.  At all.

Yes, it’s true that snakes do not inhabit the island of Ireland today, but they never did.  Ireland is surrounded by freezing ocean waters. These icy waters are way too cold to allow snakes to migrate from Great Britain or anywhere else around the Irish island.  And as it turns out, we can blame the Ice Age, not St. Patrick for the lack of snakes on the breathtaking green isle.

If you have the opportunity to visit Ireland, go.  But do so with respect in your heart for the Irish, for these people are unlike no other.  Be prepared to meet the kindest, most loving and generous people you’ve ever known.  Prepare to see breathtaking scenery, experience delicious food, and enjoy sincere, open-hearted hospitality.  Oh, and prepare to appreciate the best beer in the world.   Ireland, you have my heart.

Last But Certainly Not Least

Since March is Women’s History Month,  a lot of people celebrate St. Gertrude of Nivelles.  She’s a prominent historical female figure.  Gertrude is the patron saint of gardeners, travelers, widows, recently deceased people, the sick, the poor, the mentally ill, and travelers in search of lodging.  And our fellow Lord of the Rings fans will love this: Gertrude was the daughter of Pippin of Landen.

I Am a retired zoologist, professional animal behavior consultant, and published author. Enhancing the human-animal bond and supporting conservation are two of my greatest passions. I am also an Intuitive Empath and an Energy Healing Practitioner who utilizes Light Language for healing. Through blending science and spiritual truths, I enjoy inspiring, uplifting educating and unifying others. As my Cherokee heritage teaches, We Are One!