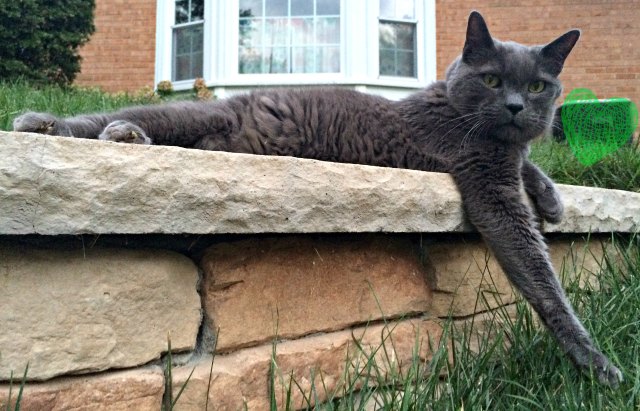 In ancient times cats were worshiped as gods; they have not forgotten this.

I don’t know any gods in this life, but I know a king.

Just so you know, we don’t walk around referring to our grey cat as “King Albert The Grey!” (with trumpets sounding in the background).   However, when the feline veterinary specialists call him by his full name we don’t correct them, because it’s hilarious to hear them say it so seriously.

But to Albert, things in his world are quite serious.

Albert is not known for being goofy and playful.  Anyone who knows him views him more like a military general, a mini grey panther, or a wee grey grizzly bear.   Albert is fierce.  But he is also fiercely devoted and unconditionally loving to those he trusts.  He is one of a kind.  He is our magnificent grey cat.

As Albert turned 15 years of age today he moved out of the “senior” years and moved into the “geriatric” years.  This has been a very challenging time.  It has also been a miraculous and life changing time for both me and Albert.  Although most people assume that senior and geriatric cats are in the “grey area” of life where things fade and waste away, Albert is proving otherwise.

People understand what the color grey is, but most are unaware of this color’s role throughout history.

Grey.  ɡrā/
1. of a color intermediate between black and white

The writer J. R. R. Tolkien made use of the folkloric symbolism of grey in his works, which draw upon Scandinavian folkloric names and themes. Gandalf is called the Grey Pilgrim; settings include the Grey Havens and Ered Mithrin, the grey mountains; and characters include the Grey Elves.

Why I Celebrate The King of Grey

Albert could probably care less about those fun facts about the color grey, but they do shed light on the color of grey and its influence in the world over the centuries.  And  I was surprised to discover that much of the symbolism of grey is relevant to our King Albert the Grey!

There are so many things I could be doing with my time today, but I chose to share with you the many reasons why I celebrate Albert.  My hope is that you might come to see one of your beloveds in a new light.

A King Who Rules Many Kingdoms.

Anyone who knows Albert understands that he pretty much rules the house. He’s not bossy, but all of the other animals –  and even the humans – recognize his status.    He has the air of a king!  This morning when I woke I was not surprised to find that the sun had disappeared.  It was not gone, but merely clouded over by deep, soulful grey skies.  Today, after all, is King Albert The Grey’s birthday, so the skies reflected his day of birth.  King Albert controls pretty much everything in our home (Ahem, I mean, his palace), so of course he controls the skies as well!  Such is the life of a King.

A King Who Makes No Apologies

One of the best qualities about Albert is his ability to never feel guilty or remorse for his choices.  What a lesson in life that is for us humans!  Albert sees his options, and makes a decision without wavering.  He stands firm and moves forward.  There is never a doubt in his mind.  He does not see right and wrong. He knows what works, what feels good, and what does not.  He does not allow the meager human trappings of obligation and guilt to guide him.  He makes conscious deliberate decisions that work for him.

“Guilt” isn’t in cat vocabulary.  They never suffer remorse for eating too much, sleeping too long or hogging the warmest cushion in the house. They welcome every pleasurable moment as it unravels and savour it to the full until a butterfly or falling leaf diverts their attention. They don’t waste energy counting the number of calories they’ve consumed or the hours they’ve frittered away sunbathing.  Cats don’t beat themselves up about not working hard enough. They don’t get up and go; they sit down and stay.  Relaxation is an art form.  From their vantage points on top of fences and window ledges, they see the treadmills of human obligations for what they are – a meaningless waste of nap time.― Helen Brown, Cleo

A King Who Knows What He Wants

Albert also does what he wants, when he wants, and not a moment sooner.  And when he wants something he asks for it without hesitation. These are invaluable lessons that I have learned from him!

He liked companionship, but he wouldn’t be petted, or fussed over, or sit in anyone’s lap a moment; he always extricated himself from such familiarity with dignity and with no show of temper.  If there was any petting to be done, however, he chose to do it. Often he would sit looking at me, and then, moved by a delicate affection, come and pull at my coat and sleeve until he could touch my face with his nose, and then go away contented. ~Charles Dudley Warner

A King Who Requires Respect and Boundaries

There is no forcing Albert to do anything.  This is another valuable lesson for anyone who wants to deepen the trust and bond between an animal and person.  Forcing him to do anything will not end well for anyone.  Respect and boundaries are a must.  He has taught me so much about what healthy boundaries are and how to set and maintain them.

In the middle of a world that had always been a bit mad, the cat walks with confidence. ~Rosanne Amberson

A King Who Walks with Confidence

My Cherokee ancestors knew (and remembered) to call upon the spirit or energy of an animal for whom they needed help, guidance, or inspiration.  If one needed leadership they might call upon the energy of  mountain lion.  If one wished to invoke the energy of grounding forces and strength, they might call on bear.  We refer to this energy as an animal’s “medicine.”  In fact, even our domesticated cats have this medicine!  Some of their medicine includes: independence, healing, curiosity, many lives, magic, cleverness, seeing the unseen, dreaming, protection, and Love.

As the above quote alludes to, this world can be quite mad.  More than once in my life I was inspired to call on the energy of King Albert the Grey.  At the time I was nervous, scared, intimidated, and wavering in my thoughts.  I was shaking and so unsure of myself.

You might be wondering why I would call on a domestic cat when I was feeling those emotions, instead of a bear or puma.  I can explain.  At the time we shared a home with four cats.  None of them could offer what Albert’s energy could do.   Albert walks with confidence.  So much so that Albert has always felt more “bear” than feline.  He has the same confident predatory energy of the jaguars and cougars I once cared for.  His energy is like that of a lion.  In fact, he has always felt more like an actual king than a cat.

This has always been so.  Ever since the day I first met him (as he was sneaking into my window one afternoon) he was beaming with calm confidence and unwavering focus and guiltless determination.  Even at 15  years of age, with his current health challenges, Albert exudes this same confidence and stability.  He radiates regal authority.  He rules our house with calm assuredness.  He teaches us with patience and compassion. This energy was exactly the kind of energy I needed that day. And the most amazing part is that I felt his energy as soon as I called upon him.

A King Who Heals and Teaches

Albert has introduced me to ideas and experiences that I never thought were possible.  Because of the healing and communication work that we have been doing together, our bond is stronger than it has ever been. Our relationship is deeper than I had ever expected, (or even wanted to have with him).  There is peace and harmony in our home because he is at peace.  Even with the health challenges he is currently facing, he is more alive and more vibrant than ever before.  While he is healing he is teaching us all.

A King Who Waits Patiently and Allows

Another reason I humbly and excitedly celebrate King Albert today is because of the immense gratitude I feel for him.  What he has taught me this year has caused me to be (and I don’t use this phrase flippantly) … in total awe of him.  I am privileged to see Albert in a whole new light.  I thought I knew him before, but what I thought I knew of him were mere labels I had placed on him.  Now I see him.  I understand him.  I feel as if he has been waiting for me to listen to him, to see him, and allow everything to unfold perfectly. He is such a gift in our lives.

Today we honor and celebrate your life, King Albert!  May the next 15 years be full of love, healing, and vibrant joy!  May your heart only know peace.  May you age gracefully.  May you always feel loved.

We love you, King Bear.

P.S. Thank you for allowing me to spend so much time on this post, instead of making you those birthday “catcakes” that I promised you.  Your patience will pay off quite deliciously in the near future, Albert!  =^..^=

Have challenging times brought you and your beloved closer? Have circumstances in life helped you to see your animal companion from another perspective?  How have they inspired or changed you? I would love to hear your story!

4 thoughts on “King Albert The Grey”