Hello Friends, and happy weekend!  I hope this finds you and yours well in all ways as we are in full swing of winter.  Here in the northeast we are preparing for a major winter storm, so this will be a (relatively) short post.

🎙For those who prefer to listen to this blog post, you can access the audio version here.🎙 You can also watch a short video summary here.

If you are fortunate to be the guardian of a feline, then you are blessed beyond measure.  Being “owned” by a cat does have its benefits; albeit frustrations and confusions, too. But any confusion and frustrations are easily mitigated when we understand the WHY behind behaviors.

If you have been flowing with this blog for a while now, you know that house cats are: 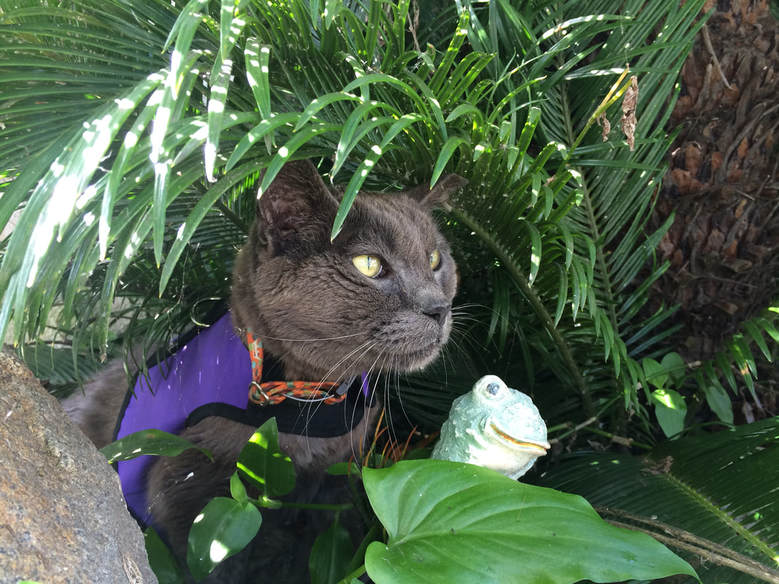 If you have been paying attention, then you now know that all house cats need:

Knowing all of this is only part of the pussycat puzzle.  Innate Behaviors are often at the heart of these needs.

‘People have forgotten this truth,’ the fox said. ‘But you mustn’t forget it. You become responsible forever for what you’ve tamed. You’re responsible for your rose.’  ― Antoine de Saint-Exupéry, The Little Prince

All in the Instincts!

Think of them as reflex responses/actions.  Unlike behaviors such as learning to ride a bike, tie your shoe, or brush your teeth, Innate behaviors do not have to be learned or practiced.

These kinds of behaviors are also called instinctive behaviors.  An instinct is the ability of an animal to perform a behavior the first time it is exposed to something that causes a response, within their body.

Our cat committee is currently creating a book for families that will discuss more of this in detail. But that’s the basics of what you need to now about today’s topic. 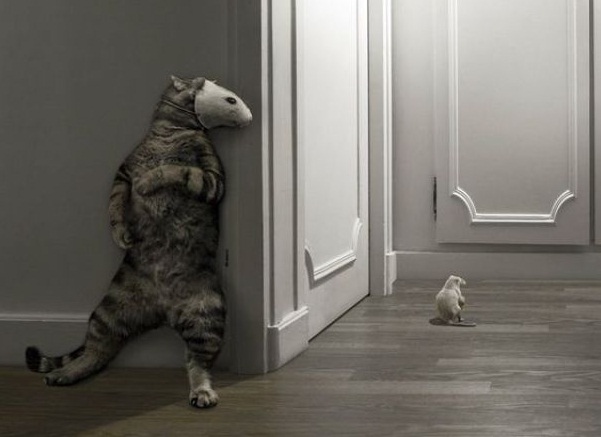 There is one innate behavior I would like to talk about today that really fascinates me about felines. And I really think you’ll enjoy it.  It’s called Caching. 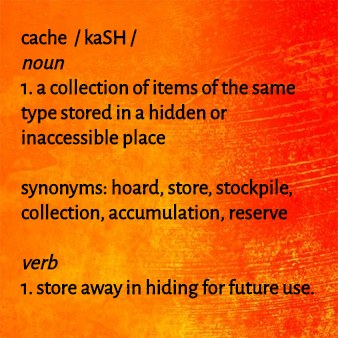 Have you ever noticed your cat trying to cover his/her food? All of our cats do it after they have finished eating if there is leftover food.  Well, let’s be honest: Knox never leaves any food. -Pretty sure he’s a direct descent of Garfield.

Cats who cover their food are not unusual critters.  Many more species do this behavior than most realize!

Many animals practice the behavior of caching. Here are a few examples:

Caching behavior is the storage of food in locations hidden from the sight of both conspecifics (animals of the same or closely related species) and members of other species.  For some species, the function of caching is to store food in times of surplus for times when food is less plentiful. However, there is evidence that some caching behavior is done to ripen the food.  Foxes and squirrels tend to spread out their food in small caches (“scatter hoard”) so that, although one may be discovered by another animal, enough will remain.

Cats are predators and prey.  Cats who live in the wild, (feral cats, cougars, panthers, etc.) often attempt to bury uneaten food or cover a recently killed carcass.  It’s believed wildcats do this to:

Once the wildcat has eaten his/her fill of their prey, the cougar will cover their prey with substrate (grass, leaves, or other ground material) to protect it from spoiling or from being eaten by other animals. The cougar will usually remain in the area near his/her cache for several days, occasionally returning to feed on the carcass.

Bobcats will cover the remains of a large kill with debris such as snow, leaves, twigs or grass. The bobcat will revisit the carcass and eat again. Panthers will rake leaves and twigs over a carcass to hide the carcass from scavengers. This behavior is very common and is part of a natural and healthy wildcat. Check out these fascinating felines caching their food in the wild!

A Caching Cougar In Action!

Below is a time-lapse video an adult female mountain lion who has been followed by Panthera’s Teton Cougar Project. This cougar is in northwest Wyoming, caching a mule deer she killed:

In winter, it’s common for cougars to lose access to at least half of every elk they kill. Cougars tend to feed on one side of an elk at a time, and by the time they are finished with one side, the other can be wedged beneath a solid layer of compressed snow and ice, and completely inaccessible.
-Mark Elbroch, Teton Cougar Project

This is important to realize because it helps us understand the foraging ecology of cougars. Cougars need to kill a specific amount of meat to meet their energetic demands for living, but they kill much more than this. In summer, bears steal their kills, and in winter, cold weather and snow steal their food. Thus, cougars are often unable to consume all of what they kill, and so they must kill again more quickly. -Mark Elbroch

Mountain lions typically cache their kills beneath a mound of snow but when temperatures drop precipitously at night, this behavior frequently backfires.  Unlike foxes, coyotes, and wolves, cougars lack the strong feet and stout claws for intensive excavation. Thus, when snows become thick ice that hinders their ability to feed, cougars abandon their kills to hunt again.

Most people think of beavers as ecological engineers, building dams, and creating new habitats from their creations, but a new study shows mountain lions modify their environments in a similar way.

Unlike wolves, mountain lions leave large intact pieces of dead meat on the landscape that draw lots of species that then distribute those nutrients far and wide. It is so important to ecosystem health to maintain carrion on the landscape which supports a huge diversity of wildlife through supplemental feeding, through maintenance of invertebrate community. It just goes on and on. – Mark Elbroch, the Director of the Puma Project

I love this video below.  It’s rare footage of a subadult female cougar.  In the video she’s just waking from a long nap, and is slightly disoriented …  A bit later she is caching the elk carcass she discovered and claimed as her own.

Caching behavior is also quite common in house cats. A lot of folks think this is because their cat doesn’t like the food, but in fact, it’s an innate behavior inherited from their ancestors.

Even the comfy couch cats who have never set paw outside retains this feline instinct.  A feline’s natural instinct is to cover food from scavengers or potential threats that might be tracking the scent. Unlike their wild cousins and dogs, House Cats are not scavengers; they are both predator and prey, so they don’t bury their leftover food to consume later; with house cats, it’s for protective purposes. But because all cats are individuals within the species, the degree to which the cat attempts to hide/bury the food depends on the individual cat’s comfort level and concern for exposed uneaten food.

What Caching Behavior Looks Like In House Cats:  The cat is burying something.  The cat is pawing at the carpet, kitchen tile, or dragging her front paw on the floor around their food mat, puzzle feeder, or bowl.  The cat may become so focused on burying the food that he/she pushes the food mat/plate around. Some cats may pull a blanket, tissue paper, or food mat over their leftovers, if these items are nearby.

In this short video you can see one of our feline family members covering his food, and how similar this behavior is to cougars:

Become the Observer of Behavior.

Frustrating felines, puzzling pussycats, and bewildering behaviors common in homes with house cats. But all behavior has roots. Either it’s learned or innate. Caching is just one example of how we so often misunderstand cats and mislabel cat behavior. We label the behavior, make it wrong, or make fun of it. But this particular caching behavior works for cats; it serves an important purpose. Once we begin to understand that all behavior serves a purpose, we gain a new perspective.

We know that wildcats and house cats are learning all the time. We can choose to learn as well. It’s up to us as stewards of Mother Earth, and guardians of house cats to learn how to show respect, better communicate with them, listen better to them, and to learn something new from them every day.

“Reality is always kinder than the stories we tell about it.” – Byron Katie﻿

A Matter of Misperceptions

Cougars, like house cats, are often misunderstood. The video below is a rare and intimate glimpse into the family lives of America’s second-largest cats. The film debunks long-held perceptions of cougars as solitary, anti-social animals and reveals their social and caring side: This footage was gathered by the conservation group Teton Cougar Project, revealing a family who is playful, affectionate, and interdependent.
The footage also shows that sometimes, adult female cougars adopt orphaned kittens that would otherwise perish.

It shows how behaviors are passed down from one generation to the next, how young kittens learn from interactions with their mother and siblings, exhibiting behaviors such as stalking, caching and sharing meals.

I invite you to watch this short film, “The Secret Life of Mountain Lions”:

Use your voice for kindness, your ears for compassion, your hands for charity, your mind for truth, and your heart for love.﻿

• The interaction of hunger and preying in the domestic cat (Felis catus): An adaptive hierarchy? https://www.sciencedirect.com/science/article/pii/S0091677376921660