Today’s Species Spotlight is dedicated to an animal found just a few miles from my home here in North Carolina.  However, this particular story that made headlines this week takes place in the Caribbean.

Earlier this week 113 Loggerhead sea turtles (Caretta caretta) were hatched on the island of Bonaire in the Caribbean.  You may be wondering why the news is  making such a big deal about this.  I think it’s for 2 reasons: the Loggerhead sea turtle is endangered, and because people played a vital role in helping these wee turtle hatchlings safely begin their new lives in a world that does not favor the small and defenseless.  Thanks to a group of volunteers, who formed a human wall around them, these sea turtles had a chance to live.

Watch the video of humans helping an endangered species!

This human wall was imperative to the newly hatched sea turtles’ survival.   When sea turtles hatch from the nest on the beach, they crawl towards the brightest light they see, which is usually the moon hanging over the ocean.  Sea turtles are born with the instinct to move toward the brightest direction. On a natural beach, this direction is the light of the open horizon.  These turtles hatched on a beach next to an airport.  Because of this conservationists were concerned that the turtles would crawl towards the lights from the buildings and planes.  Two years ago, an entire group of sea turtle hatchlings were lost because they did exactly that.

Dr. Sue Willis, the program director of Sea Turtle Conservation Bonaire  told ABC, “We surround the baby turtles on both sides so that they cannot see the airport lights.  We give them ample space to crawl and form a line all the way down to the ocean, so they stay on path.”  All of their efforts succeeded in helping all 113 turtles into the ocean!  Loggerhead sea turtles have been listed as endangered for decades, mostly because of human activities that are detrimental to their health and their habitat.  But this week, people will be the reason these turtles survived.

HABITAT:  The loggerhead is widely distributed within its range.  It may be found hundreds of miles out to sea, as well as in inshore areas such as bays, lagoons, salt marshes, creeks, ship channels, and the mouths of large rivers.  Coral reefs, rocky places, and shipwrecks are often used as feeding areas.  Nesting occurs mainly on open beaches or along narrow bays having suitable sand, and it is often in association with other species of sea turtles.  Most loggerhead hatchlings originating from U.S. beaches are believed to lead a pelagic existence in the North Atlantic gyre for an extended period of time, perhaps as long as 7 to 12 years, and are best known from the eastern Atlantic near the Azores and Madeira.  Post-hatchlings have been found floating at sea in association with Sargassum rafts.  Once they reach a certain size, these juvenile loggerheads begin recruiting to coastal areas in the western Atlantic where they become benthic feeders in lagoons, estuaries, bays, river mouths, and shallow coastal waters.  These juveniles occupy coastal feeding grounds for about 13 to 20 years before maturing and making their first reproductive migration, the females returning to their natal beach to nest.

REPRODUCTION AND DEVELOPMENT:  The U.S. nesting season occurs from April through September, with a peak in June and July.  Nesting occurs primarily at night.  Loggerheads are known to nest from one to seven times within a nesting season (mean is about 4.1 nests per season) at intervals of approximately 14 days.  Mean clutch size varies from about 100 to 126 along the southeastern U.S. coast.  Incubation duration ranges from about 42 to 75 days, depending on incubation temperatures, but averages 55-60 days for most clutches in Florida.  Hatchlings generally emerge at night.  Remigration intervals of 2 to 3 years are most common in nesting loggerheads, but remigration can vary from 1 to 7 years.  Age at sexual maturity is believed to be about 32 to 35 years.

Adults grow to an average weight of about 200 pounds and an average length of 3 feet. The species feeds on mollusks, crustaceans, fish, and other marine animals. 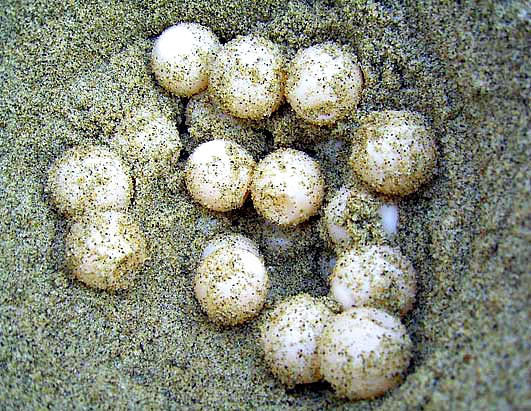 REASONS FOR CURRENT STATUS:  Threats include loss or degradation of nesting habitat from coastal development and beach armoring; disorientation of hatchlings by beachfront lighting; nest predation by native and non-native predators; degradation of foraging habitat; marine pollution and debris; watercraft strikes; disease; and incidental take from channel dredging and commercial trawling, longline, and gillnet fisheries.  There is particular concern about the extensive incidental take of juvenile loggerheads in the eastern Atlantic by longline fishing vessels from several countries.

MANAGEMENT AND PROTECTION: In the southeastern U.S., major nest protection efforts and beach habitat protection are underway for most of the significant nesting areas, and significant progress has been made in reducing mortality from commercial fisheries in U.S. waters with the enforcement of turtle excluder device regulations.  Many coastal counties and communities in Florida, Georgia, and South Carolina have developed lighting ordinances to reduce hatchling disorientations.  Important U.S. nesting beaches have been and continue to be acquired for long-term protection.  The migratory nature of loggerheads severely compromises these efforts once they move outside U.S. waters, however, since legal and illegal fisheries activities in some countries are causing high mortality of loggerheads from the Northwest Atlantic Ocean DPS.  Due to the long range migratory movements of sea turtles between nesting beaches and foraging areas, long-term international cooperation is absolutely essential for recovery and stability of nesting populations.

The NC Sea Turtle Project, run by the NC Wildlife Resources Commission’s Division of Wildlife Management, is committed to monitoring NC’s sea turtle population.  This project would not be possible without the help of hundreds of volunteers, as well as many organizations and agencies.   Each summer, the North Carolina Aquarium works with N.C. Wildlife Resources Commission and local sea turtle rescue organizations, accepting a limited number of hatchlings that did not make the initial trek to the ocean.  Generally, these turtles are discovered during routine nest excavations three days after hatching.  Since last year, and for the first time, the North Carolina Aquarium will track and gather data on newly released sea turtles thanks to evolving technology and a new pilot research program.  Watch Tagging and Release Video Here.

What can I do to help protect sea turtles?

Source for these tips:  Florida Fish and Wildlife Conservation Commission

Click here to learn more about How You Can Help Sea Turtles!